Today marks a momentous day in American and world history, Barack Obama is now the president of the United States. Lots of questions will be asked of this new president and he will be held accountable like none other.

One question I have is how quick is the ‘Failure’ Google Bomb going to take to change? If you’re not familiar with what I am talking about let me explain

First let’s start with Google Bomb. What is it? Google Bomb is a term that describes actions that webmasters and web users can employ to ensure that a specific web page comes up #1 in a Google search. This is done by creating a ton of links to one page using a specific term. For the Bush Google Bomb the term ‘Miserable Failure’ was used and linked specifically link to the George Bush bio page on Whitehouse.gov. very funny stuff if you aren’t a Bush fan, not so funny if you are.

To combat this Google changed it’s algorithm to address this and the Google Bomb was gone. But not so fast. If you search for the term ‘Failure’ his cached page is still in the 2-3 position BUT because of a change in executive office the page is populated with information on the new president Barack Obama.

Below is a screenshot from today 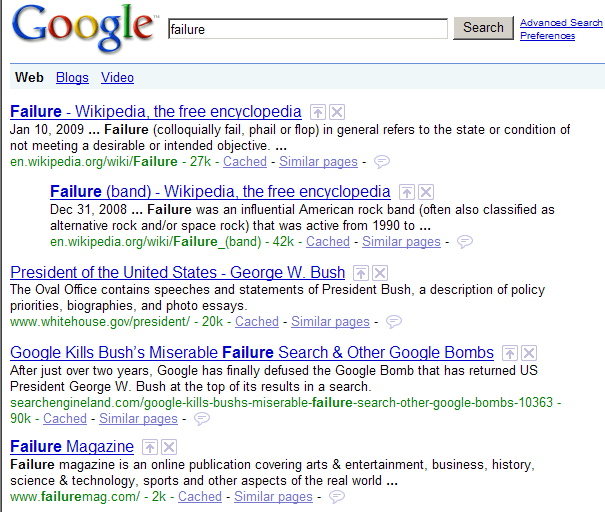 The Bush page is stilled cached but when you click on it it goes to Obama’s info.  If you’re a nerd like me you will be watching this to see how quickly the Google algorithm will work

It seems Google finally got around to crawling the new White House site and now Obama's profile is the number one website result for failure.

I guess this Change thing will take a little more time