You are here: Home / Google / State of the Search Engines Winter 2009

A lot has happened in the strange and wonderful world of Search Engines over the past year so lets recap:

January 31 2008 – Microsoft offers up it’s services to run Yahoo! in an unsolicited take over bid. Yahoo! thinks it over.

March 17 2008 – Google’s CEO Eric Schmidt says the deal is bad for the internet.

Meanwhile Yahoo!s stock rises on the news and Microsoft’s dips

Early April 2008 – Microsoft CEO Steve Ballmer tells Yahoo! if it doesn’t except the offer they should expect a hostile takeover.

April 9 2008 – Yahoo! and Google announce a partnership in Pay Per Click ads. Yahoo! agrees to run some Google ads in Yahoo!s search results

April 30 2008 – Microsoft states that it wants to keep Yahoo! employees in court documents.

May 5 2008 – Microsoft announces that the deal is off. Ballmer states Yahoo!s deal with Google is a factor

Nothing happens for a little while

July 14 2008 – Microsoft does something we’ve all done once or twice in our life time – drunk dial. Microsoft teamed up with Yahoo! stock holder Carl C Ichan in a bid to take over Yahoo! giving them 24 hours to decide. Hahahaha, that was a funny one.

November 6 2008 – Google breaks off it’s deal with Yahoo! in shared advertising leaving some to question whether Google simply helped Yahoo! to thwart Microsoft’s take over attempt

January 14 2009 – Carol Bartz is announced as the new head at Yahoo! only to be overshadowed by the Social Media Inauguration a week later

Search Engine Stocks Over the Past Year

Everyone took a hit over the last year, even Google but they still remain on top with shares trading at $303.08 as I am writing this. 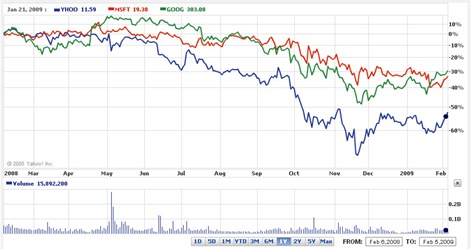 Search Engine Stats Over the Past Year

So now that we are up to date how much was gained and lost by the search engines over the last year? Well you don’t have to be an analytics guru to see that Google made out quite alright in Market Share over the last year;

So what does this all mean?

I’ve thrown a lot of information at you and the take away is this; if you are planning a marketing campaign in pay per click or SEO go where the market is. In the case the market is clearly in Google.